Since Abiko has long been a connection point of the two major roads, Mito-Kaido and the Narita-Kaido, it is known as a base for visiting the Naritasan Temple. In the Tokugawa era, the town used to have the headquarters of the Mito clan and wholesalers quarter. In the early Taisho era, it became recognized as the scenic place in the suburb of Tokyo. Prominent figures including Jigoro Kano of the Kodokan, Sojinkan Sugimura of the Asahi Shimbun, Noboru Otani of Nippon Yusen Kaisha, Ichiji Mitani of Mitsubishi, Dr. Kengo Murakawa of the Imperial University, famous authors such as Naoya Shiga and Saneatsu Mushanokoji, Bernard Leach, a ceramic artist, Kotaro Tanaka, a lawyer, and literary figures of Shirakaba School built their villas in Abiko. The magnificent forests and the mysterious scenery of Lake Teganuma lured all these people to the area. Abiko thus became known as a cultural town called “Kamakura in North”. 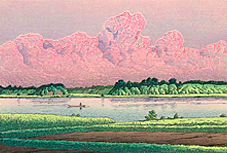 In 1930: Teganuma Pond and Tableland in Abiko
(woodblock print by Kawase Hasui)

Background of the establishment of Abiko Golf Club 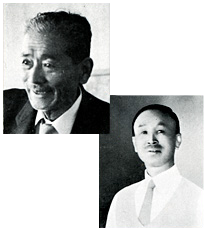 When Mr. Masaharu Someya, the mayor of Abiko at that time, was worried about planning to develop a part of this forest area as a residential area, he consulted with Mr. Sojinkan Sugimura, then received a recommendation to build a golf course. That was the starting point of founding Abiko Golf Club.

The first plan unfortunately failed, and Mr. Someya appealed to Mr. Jigoro Kano for assistance to overcome his plight. With the efforts of Mr. Jigoro Kano and Mr. Soto Sugimura, Mr. Ryo Kato was identified as the right person in charge of establishing a new golf course. Kato was an enthusiastic member of Ichizaemon Morimura’s Tokyo Golf Club and was a director of Asano Shipyard.

Later, Mr. Someya wrote in his essay to the newsletter of the Abiko Golf Club, “Memories of the founding of the Club,” that “Mr. Kato was, in fact, the appearance of a savior for me.” Thanks to Mr. Ryo Kato’s sacrificial efforts, Abiko Golf Club was finally established.

Nine holes were completed and a temporary opening ceremony was held

Mr. Ryo Kato had the belief that he wanted to create a golf club, which was then a social gathering place for the nobility, for commoners where equity, freedom, and democracy would prevail, and people would respect etiquette and manners”. Mr. Kato made capital of 150,000 yen with his own money and financial assistance from Ichizaemon Morimura. He made an investment plan to establish Abiko Country Club Co., Ltd., for an enterprise to build a golf course, land, water amusement parks, and residential area of c 33 acres. Then in January 1930, he started making the golf course by lending “Golf Links” to Abiko Golf Club. He asked Messrs. Shiro Akahoshi and Rokuro Akahoshi, who were both the Tokyo Golf Club members, to design the new course. On October 5 of the same year, the first 9-hole in-course was completed, and a temporary opening ceremony was held.

Eighteen holes were completed and the opening ceremony was held.

Shortly after completing the first nine holes, the first chairman, Ryo Kato, passed away suddenly on January 8, 1931, due to illness. Then, Minoru Tanaka took over as a new chairman. On October 18 of the same year, all eighteen holes were completed, and finally, the long-awaited opening ceremony was held. On this day, Prince Asakanomiya, one of the royal family members, attended the opening ceremony. It said that many local people gathered in the club, in addition to guests and the club members, and brought about an unprecedented bustle in the town of Abiko.

The completed Abiko course skillfully utilized the plateau and valley between Teganuma and the Tone River. It then became one of the most strategic and famous courses in the Kanto region with its majestic forest and ideal terrain. In August 1933, the Kanto Pro Golf Championship was held, followed by many national competitions. In 1933 alone, the number of members reached 1,200, including 600 consisting of regular members and shareholding members, plus 600 week-day members. 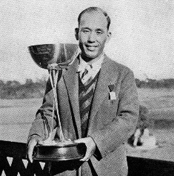 Survival of Abiko Golf Club from the war

During World War II, the Abiko course fell into extreme devastation. The area around the 13th short hole was converted into an air defense position, and the Club faced a danger of closing. Mayor Someya, who was deeply involved in the Club’s establishment, was seriously worried about such a situation. He signed a temporary lease contract with the Naval Accounting School and left the land management in the hand of the Navy. This procedure barely prevented the Club from being abolished.
We must say that the Club and its course were truly fortunate compared to some other golf courses that ceased to exist forever with a similar fate.
After the end of the war, the Abiko course, along with the Sagami Country Club, managed to escape from the land requisition by the Occupation Army. These were the only two golf courses left for the Japanese players in the Kanto region. With all the effort, the 18-hole course finally reopened in September 1948.
Because the Club could not restore the membership population as expected due to the dispersion of former members, it opened the door and welcomed foreign golfers by creating associate membership. That is why the Club embraced many foreign members, including outstanding second-generation Japanese-American golf players such as Chuck, Morimoto, and Otake. At the same time, Yasuomi Ogura, then chairman of the board, came up with and implemented the idea of corporate membership for the first time. It achieved significant results in order to raise funds.

1952. (Showa 27)
The course of Abiko was further remodeled and repaired by Mr. Seiichi Inoue. At the same time, the first cornerstone of the new clubhouse was laid down in place of the old clubhouse in 1952, and construction work was completed in June of the following year. In 1954, the Club transformed its legal formation into an incorporated association. With this, Abiko Golf Club revived both in name and reality and became one of the distinguished golf clubs in the Japanese golf world.

1954. (Showa 29)
In 1954, the Club transformed its legal formation into an incorporated association. With this, Abiko Golf Club had restored both in name and reality and became one of the distinguished golf clubs in the Japanese golf world.

The Club celebrated the 50th anniversary of its founding with the new clubhouse (the 3rd generation), which was completed timely for this occasion.

In 2005, the 75th anniversary ceremony was held at Tokyo Kaikan.

2012. (Heisei 24)
The Club closed the course for ten months for renovation, with an aim to convert it into the “one-green” system. The renovation work was contracted to and supervised by the course designer Brian Silva and the course shaper Kye Goalby who embodied Silva’s design. The course reopened temporarily in November 2012.

The Ground Opening Ceremony was held.

The renovation that brought a new breeze to the course

2020 (Reiwa 2)
In response to the government’s declaration of emergency due to the spread of the new coronavirus infectious disease (COVIT-19), the Club decided on a temporary closure. It reinforced infection preventive measures when reopened.